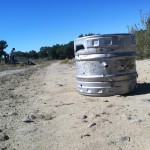 Reading, Writing, and Arithmetic is what we learn in school. What we don't learn is common sense… if you have to dump go to the land fill!!! As we turn to the fall each year we meet up with our local BLM Field Office to clean up the Glade. It boggles my mind that people can't drive an extra five miles to go to the dump. Since we have idiots that can't make it there we head out to clean up after them. Allen and I took out his Jeep and met up with Nick and his wife early on in the day. We made a great team. Mattresses, TVs, and fridges went in the truck. All of the filled bags made it into the Jeep. There looked to be about three hundred people that came out to help. We also saw lots of mice hiding in trash as well as a Rattle Snake! The BLM supplied trash bags, tools, and support to everyone that came out. This is one day where all of the user groups have a unified goal. As we pulled up at 8am the entrance was already littered with trucks, Jeeps, and cars. We lined up to sign in and we were off and running. Allen had a target area where there were some mattresses. On the way we found a very littered shooting area (which is illegal in the Glade). People just bring out what ever they can to shoot. When they are done they leave it all behind for us to clean up. We called in for a truck, but couldn't get one and that is where we ran into Nick and his wife. 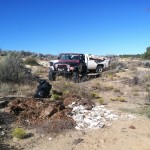 The BLM has worked very well with the Cliffhangers Jeep club here in Farmington. We used to meet up with coffee and donuts get our trash bags and we were off. It was normal to see about twenty inmates sweeping the main road. One of the local judges and I are going to be working together to get them back out for clean ups. Another thing that my dad organized was a City graffiti truck. When clean up time came around the truck would hit the graffiti in the Glade real hard. A lot of things have changed! No more tractors coming out to dig out abandoned cars, no more wreckers dragging the cars out, no more graffiti trucks, or even inmates sweeping the main road. We have fallen short in my eyes. The efforts of all of the user groups including the most local have also fallen short. This weekend there were three hundred people, there could have been two or three times that amount. 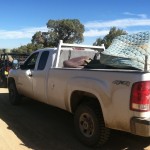 There are some areas where action and enforcement are a factor. These focuses are the High School party people who care to use the Glade but don't care to clean it up. The Glade is littered with party spots where palates are burned, bottles are broken, and anything else that resembles trash is left behind. On the other hand our transfer stations are charging to dump in our rural areas. Even worse the transfer station's long distance number encourages people to dump their construction trash in rural areas like the Glade. I recently met the head coach of one of our high schools when he was dumping construction trash at one of the entrances. He claimed that he didn't know we had a county land fill. These are things we are up against and one of the BLM Rangers and I are going to report on this and take it to the county commission. Hopefully we can fix these issues. 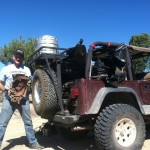 At the end of the day Conoco Phillips provided lunch from Spare Rib BBQ. If you are into BBQ and have not had a meal there… you have to go! We all got together and told stories about our day. Around the table you could here about the oddities seen in the glade. I was glad to see the turn out, because it seemed like we didn't have the notice to bring out the masses. We will bring this back!!! The Cliffhangers need to start sponsoring a spring clean up once a year. That is how dad did it and that is how we will get it done next year. I will shoot for the inmates and ask for the graffiti removal truck so that we can make the impact that we used to. Thank you to all who participated.